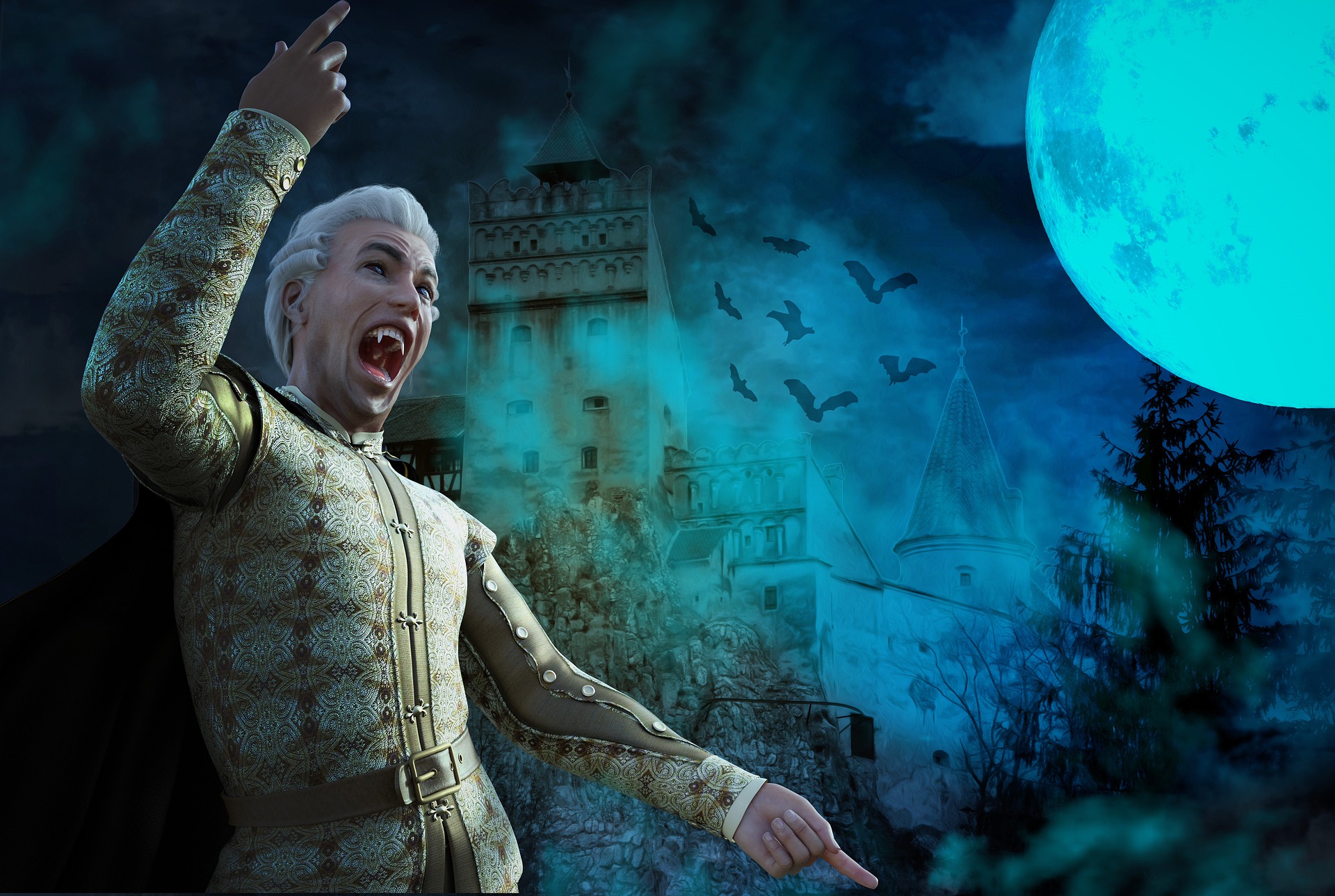 Don’t worry if you missed Omar Zahzah’s clever vampire satire “The Easiest Time” last year. We’re reissuing the short story now FOR FREE on the Garden as a Halloween treat.

We hope you enjoy Omar’s hilarious story as much as we do!

The Easiest Time by Omar Zahzah

Not gonna lie: it’s not the easiest time to try and make it as a real-life vampire.

(And no, I’m not part of that whole New Orleans scene. I’m the real deal.)

Name’s Les Drake. (My agent’s idea—I wanted something a little less… drama, I guess. “Why hide it?” she’d said. “You’re doing this, right? Might as well go all the way. Make no bones—no fangs—about it. Plus, your real name just doesn’t fit. These things happen.”) You may—heavy emphasis on the conditional here—have heard of me. More likely not.

When I look back at it now, I guess you could say I probably first tried breaking onto the scene in the mid-2000s. That was an interesting time, what with social media just starting to take off. I made a few accounts with my real name—mostly going for the dark, broody black and white angle. I had a LiveJournal, too—remember that? Very much a “day in the (after?) life” kind of vibe.

Of course this was way before the influencer trend came into play. In a lot of ways I feel like if we’d tried those strategies, with the right creative team behind it today, it could have gone so much better. But back then? So much more was up in the air. You really had to do the heavy lifting to get noticed. The tech-giants of today were also still finding their way, figuring out how to lock down users and turn profits. I have a feeling when historians and sociologists or whatever look back to this time, tech is going to seem a lot more groping and less dominant than we’re used to thinking nowadays. If the tenor of tech now is more like so many multi-colored diodes and the gray of comment boxes, back then I think it was more of a heat haze—we were waiting for so much to settle. If I remember correctly, this was also around the time that the whole JT LeRoy scandal broke, and James Frey fumbled awkwardly on his live Oprah interview to argue that maybe some, but definitely not all of his “memoir,” A Million Little Pieces, had been fabricated. Old-school showmanship in a new tech world.

But I must have done something right. One day, after one of those ambling Facebook posts, there it was: a comment that said only Call Me, a phone number listed below. That was the phone number for Jenny Cross, who was to become my agent.

“You and me, Baby, we’re going to take over the world!” she declared on that first call. Sound a little dramatic? That was Jenny. Thing is, as I was to learn, when Jenny set her mind to something, she made it happen.

One thing I would like to set the record straight about is that I was Jenny Cross’s first: it was repping me that got her on the path of repping the differentially sapient (as we prefer to be called.) Hell, it kills me to say it, but I’m pretty sure you’re more likely to have heard of Rufus the Werewolf—that fucking name; I mean, come on—Rufus??—than me. But I’ll just say this for the record, too—Rufus reached out to Jenny after his people caught word of what we were working on, and she charged them for an intake. “Just a formality to pad the coffers, Baby,” she’d told me at the time. “That furball means nothing to me. It’s Les that lights my future.”

That’s what made it work in the beginning, though—we were both thirsty. Jenny for a way to get out of the monotony of a successful but dry career in entertainment representation (“Don’t get me wrong—being a spin doctor who turns her clients’ scandals into edifying bursts of news fodder has become etched into my fucking DNA at this point. But one of life’s big secrets is how boring being good at something, even being the fucking best at it, can really get.”) Me, I wanted to get a handle on my story. I mean, as I’m sure you can imagine, it’s not like I needed to work to survive. This wasn’t about eating, but feeding a different type of craving. My kind, we’re supposed to stay out of sight. We thrive in the shadows, blossom in the dark. But eventually, I wanted something more. I started needing what thousands of years of survival had encouraged us to avoid—to be seen and heard. And by the way, humans, this seems to be a good point to clarify that you’re most definitely not the only beings who thrive on sharing stories—we all have stories to tell. It’s just a little more complicated for some of us…

Anyway. Me and Jenny got going, and things were looking good. I started doing some interviews for the local papers, and a film crew made me the subject of one of their productions. It was three kids—I guess “kids” isn’t right, since they were in their early 20s, but then again you lose track of what youth means once you get a few hundred years on you, anyway—who had dropped out of an over-priced Masters in film program but, like me and Jenny, were still determined to make it. Monique was the brains, the brilliance—and I do mean brilliant; she was one of those people whose ideas just snowballed and built upon themselves in the moment as she was setting everything up. She had this real frenetic energy that would just build and build and build, and the more excited she got the less breath she’d have, so by the end of a twenty minute monologue of creative riffing she’d be rasping jagged monosyllables. But wow, could she ever set up a shot.

Then there was Jake, who was always lumbering behind with the camera, always somewhat out of step with Monique’s 100mph genius, and Lester, the sound guy (that became a bit of a joke once they started filming: Les and Lester.) They called the project Film Crew And a Vampire. Punning and bare bones all at once—all Monique’s idea, of course.

As with me and Jenny’s connection, the film was about all of us trying to get our voices heard, our stories told. Even the most casual footage shot—me getting ready to start the night, the rambling, cusp of morning reflections about the nature of the world and our place in it—all of it built towards that larger message. And the three of them were really sensitive to my resistance to cheap sensationalism—they got one shot of me eating in there, but it wasn’t exploitative in the least, and they gave me final say about whether or not it stayed in (I told them I was fine with it if it wouldn’t impact their ability to distribute. Guess the jury’s still out on that one, since the film was never finished.) They also had some decent meta-footage of themselves trying to make the film and reflecting on their own aspirations. All of us, together.

Film Crew And a Vampire started to garner some strong cult clout. Some footage was leaked here and there (some of that leaked footage started to get popular again around the time the Sad Satan game was “discovered” on the internet, making for some interesting web browsing.) I did an interview for The Guardian, and there was even talk of me taking on a small role in Xan Cassavetes’ Kiss of the Damned. Jenny loved the irony of a real vampire playing a fake one on the cinematic screen, and I agreed.

Best I can conceptualize, it was a kind of decrease in momentum. First, Jenny stopped returning my calls. I’m usually cooler than this, but soon I got so tired of the runaround I actually flew straight into the window of her office on the 15th floor late one night, only to find Rufus’ sleepy, droopy eyes trained lazily upon me, his mouth twisted into a snotty, canine-riddled grin. And Jenny, sitting right in front of Rufus, was giving me this look that somehow conveyed both “Did you really just do that” with “come on, grow up. These things happen” all at once. I figured it was best to leave it at that. I don’t much like to encourage the narrative about the werewolf/vampire feud that got so popular circa Underworld (don’t get me wrong, though; I totally could have taken him.) They turned back to one another and started talking before I’d even flown away.

Monique, Jake and Lester abandoned Film Crew And A Vampire to make documentaries about the contemporary protest movements, and from what I hear they’ve been quite successful.

Sometimes you give it your all, but it just doesn’t take off. In other moments, things never quite get off the ground before they start to unravel. I feel like the latter is what leaves a bitter taste in my mouth. I have eternity to fail on my own. But to have started something really special with some truly talented people, only to have it fizzle out because their talent and ambitions lead them elsewhere—well, that hurts. And can you imagine trying to compete with this news cycle lately? It’s hell, let me tell you.

Not that I’ve given up. I’m still reaching out to the papers, now trying the whole “Why COVID-19 Sucks—For Vampires” angle (no, we can’t get it, but it makes eating a lot more difficult.) I’ve also been trying to get in touch with Netflix; I feel like my story might be a good fit for the latest character of documentaries they’ve started developing. It’s just hard to get through without representation is all.

No, it’s definitely not the easiest time to try and make it as a real-life vampire. But every one has a story to tell. And despite the stagnation, somewhere deep inside, I just know if I keep at it, something’s bound to happen. So I keep going. And just you wait: you’ll be hearing about Les Drake soon enough.

I promise you that.

Omar Zahzah is a writer, poet and organizer whose creative and political writings have appeared in various publications including Narrative magazine and the New York Times. Several of Omar’s poems were featured in the anthology, Beside the City of Angels: An Anthology of Long Beach Poetry. Omar holds a PhD in Comparative Literature from UCLA.