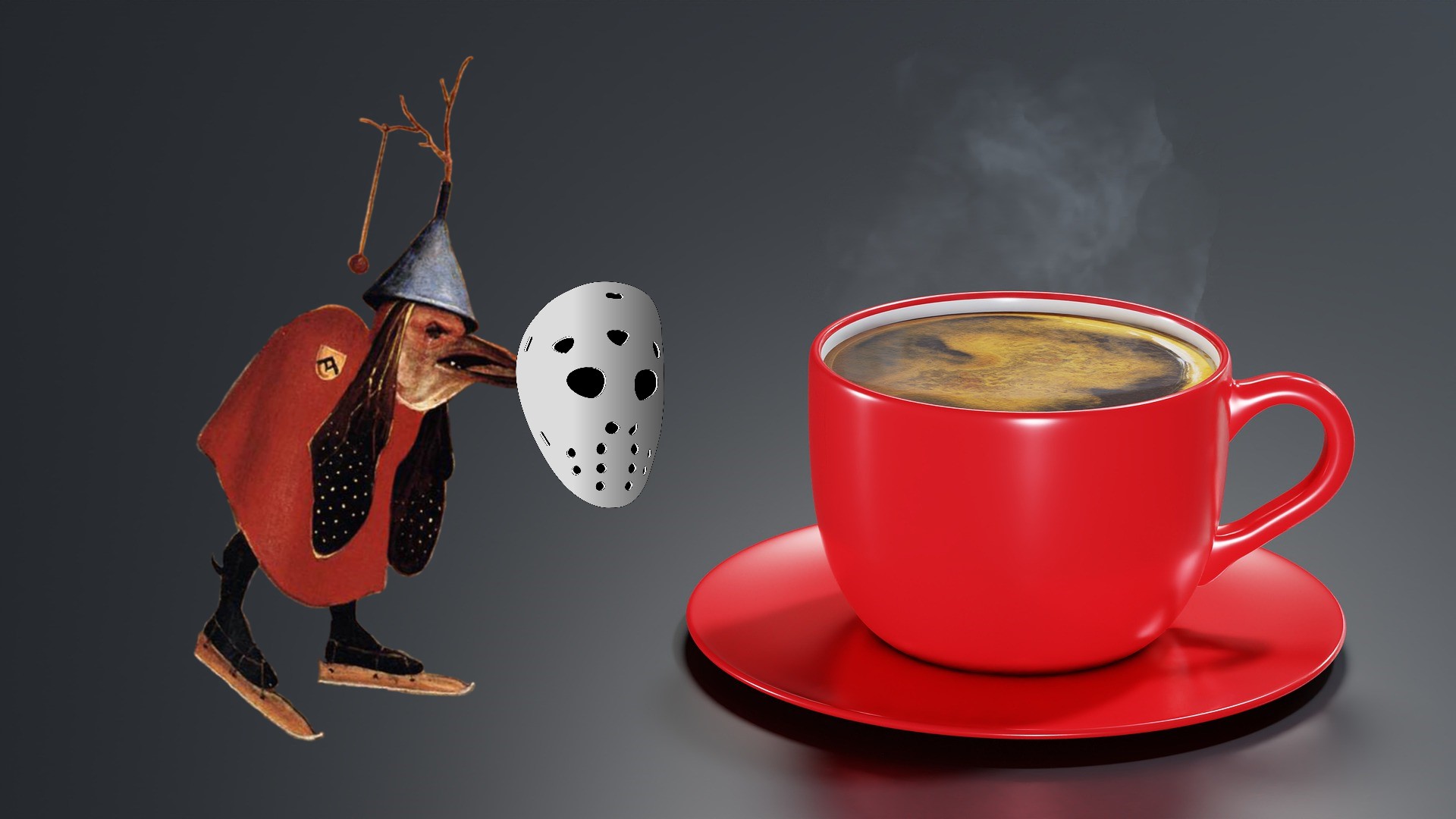 Your humble Gardener proudly presents another HV reissue: Friday the 13th edition. Maggie Hagan’s “Don’t Talk to Me Until I’ve Had My Coffee” is a surreal account of a day in Los Angeles. Or an average trip to Starbucks for actor James Cromwell. Enjoy!

Don’t Talk to Me Until I’ve Had My Coffee

Considering how jittery I get and how I feel like my heart might explode whenever I drink coffee, I’m pretty sure one line of coke would kill me instantly. Not that I’ve ever considered doing coke. Well…maybe once, at my best friend’s friend’s boyfriend’s pre-gaming get-together. They were a bunch of well-off thirty-ish white guys in finance so I wasn’t too surprised when they brought out coke and started snorting it with a 100 Yuan note. Because apparently all of them had lived in China at some point. Something they brought up every five minutes, reliving their glory days of international travel and “finding themselves.” If I was ever going to try coke, it would’ve been then. But I passed, even when my best friend’s friend’s boyfriend offered me some for what must’ve been the third time that night.

All of which is to say, I don’t usually have coffee. But this particular morning, I was desperate. After hours of insomnia, I wasn’t able to get much shut-eye before my brother called me way (way) too early in the morning (4:49 to be exact (who does that?!)) to remind me the new Golf Le Fleur’s launched in a bit so I should wake up soon to make sure I snagged a pair before they sell out. (Golf Le Fleur Converse One Stars are the product of a collaboration between the shoe brand, Converse, and the rapper/oddball/artistic mastermind, Tyler, the Creator.) He didn’t want what had happened the past two times to happen again, i.e., me sitting dejectedly in front of the screen with the store’s website pulled up, desperately refreshing in the hopes that the sold-out shoes would magically restock. I know my brother was just looking out for me, but I wish he wouldn’t: it became clear I wouldn’t fall back asleep so I started getting ready early and sat in a Starbucks for a while before beginning my long trek to school.

Two hours pass and I really have to pee. Without the diuretic effect of coffee, my small bladder can go maybe five hours, if I really push myself; with the effect, two’s the max. In fact, making it this long is possibly my biggest accomplishment in recent weeks. I stop at yet another Starbucks along the way and slide into their bathroom as soon as it’s free. I release a seemingly endless stream into the immaculate porcelain bowl. Needs now met, I look around the quaint compact restroom. The harsh florescent lights that had illuminated my journey to a delightfully empty bladder transform the minty interior into a tacky near-neon green. The second I reach for the soap dispenser, the artificial odor of lavender aggressively fills the small room smelling like the unsuccessful results of scientists’ attempts at creating a scent they’d never actually experienced. With both my eyes and nose still under assault, I exit the bathroom and almost walk right into a little person.

“I’m so sorry,” I apologize. “I didn’t see you there.” Realizing how potentially offensive that statement could be when directed at a dwarf, I can feel the heat rising in my face. But the man doesn’t seem fazed, either by my apology or my blunder. He continues to stand there, in a bright orange Hawaiian shirt with palm trees on it, beige cargo shorts, and pink Adidas slides with purple socks, a decision I could never get behind.

“Follow me,” he orders as he turns around, his mullet swinging behind him in the process. He takes a few steps then turns to see if I’m following. I’m not.

“I said follow me.” Anger creeps into his previously apathetic voice. I realize he’s completely serious.

“Look, I don’t know who you are or what you want but there’s no way in hell I’m—” I stop short. He now has a gun pointed at my chest.

“I said follow me,” he repeats. This time I listen. We leave the corridor where the restrooms are located and which open up into the rest of the mostly empty café. The beige walls are carpeted with carefree couples, children, and dogs—all overly enthused at the prospect of watching people sip their coffee for the rest of eternity. Their watchful eyes seem to be mocking me. At the register, a barista is ringing up a customer.

“So? That’s his Second Amendment right,” the barista responds without looking over.

“What? He’s holding me against my will! Call the police!”

“Did you purchase anything?” he asks.

“I’m sorry. I’m only obligated to help paying customers. How ‘bout purchasing something and then we can talk.”

“You can’t be serious. This man is kidnapping me!”

He chuckles a little. “You don’t look like a kid to me.” He burst out laughing at his own joke for much longer than either it or the circumstances warrant.

“Lady, are you just gonna stand there?” I decide to focus my efforts on the customer, who seems just as unfazed as the barista. She’s nonchalant but old and I hope that’ll count for something. Maybe some kind of grandmotherly compassion will take hold of her.

“Dear, I would do what the man says. He’s got a gun,” she replies “Did I mention I wanted soy milk?” she directs at the barista. “I can’t handle regular milk anymore. I’ll be in the bathroom all day if you know what I mean.”

“Satisfied?” the little man asks. When I don’t say anything he presses the gun into my side. “Keep moving.” We walk a short distance to a curb where a baby blue Toyota Prius is parked.

“You’ve gotta be kidding me,” I say under my breath. “He’s kidnapping me in a fucking Prius?” Thankfully, he doesn’t hear me. He seems like a calm, level-headed man, as far as kidnapping dwarves go, but I don’t want to push my luck.

As we approach the Prius, a towering man exits the car. Unlike his partner, he’s dressed less atrociously: a plain white T-shirt with a small print of a cat’s face in the center, cuffed straight-leg jeans, red Vans. His clothes say skater boy but his wrinkles and smattering of gray hair say mid-40’s, like what I’d imagine Tony Hawk looks like now. Thing is, I don’t really know what Tony Hawk looks like so there’s a chance he’s the one kidnapping me, which wouldn’t be so bad. At least I’ll be able to say I’ve been kidnapped by skateboarding legend Tony Hawk. Assuming I can say anything at all once they’re done with me.

“I’m so terribly sorry about all this,” Maybe Tony Hawk says once we’ve reached the car. He has a slight accent I can’t place. He directs me into the backseat, making sure I don’t hit my head on the way in.

“Where are you guys taking me?” I don’t expect any answers but I figure it’s worth a shot.

“Shut up,” the smaller of the men responds as he gets in, taking the seat next to me while keeping the gun pressed firmly against my ribs. “Drive,” he tells Maybe Tony Hawk.

“I can’t. You’re not wearing your seat belt.” My gun-wielding captor looks like he wants to argue but changes his mind. He puts his seat belt on and looks expectantly at his partner. Maybe Tony Hawk looks pointedly at me. I hurriedly buckle up as well.

“Now we’re ready to go,” he states as he starts the engine. Christmas music blares through the speakers. We’re in July.

“Did you bring me my skinny latte?” our driver asks my backseat companion.

Maybe Tony Hawk frowns as Mariah Carey announces that all she wants for Christmas is us. “I guess we can stop by another Starbucks on the way,” he says as we drive away.

I really wish I hadn’t gotten coffee this morning.

The next morning, John Doe woke up to the sound of his phone’s bell-like alarm. He showered, changed and headed down to the kitchen. His gray granite countertops were covered in breakfast material as his wife, Jane Doe, prepared his omelet with a bacon, ham, tomatoes, spinach, bell peppers, and feta cheese—just how he liked it. They’d developed this routine after moving into their newly-renovated ’50s-inspired home in a neighborhood they wouldn’t have dared stepped foot in only a few years ago. He was thankful the neighborhood had turned around in recent years.

Fox News resounded through every room of the sizeable house. The news anchor informed the audience that a girl in her early twenties had been kidnapped from a Starbucks in broad daylight as people watched and drank their coffees. After the break, they’d inform the public on Kylie Jenner’s nicknames for her daughter.

John Doe mulled the news as he munched on his perfectly cooked omelet. “I thought it was something cute like Stormi,” he said.

“No, honey. That’s her actual name,” Jane Doe responded as she poured her husband his first cup of coffee for the day.

Did you know HV published stories? Find more in our Words section! Interested in submitting? Become a member!

Banner by MasterTux from Pixabay; Altered by HV

Morning Coffee by Jo-B from Pixabay